by Gail Warren
﻿Providing relevant, current collections and reference services for members of the judicial branch, particularly the two appellate courts in Virginia is, and will always be one of our library’s primary goals. However, staff experience and responsibilities have expanded in the last two years as we have embraced our “newer” role as the archives for the Supreme Court of Virginia. Interestingly enough, as the demands for immediate digital access to legal information increases, a parallel interest in the history of Virginia’s judicial branch, its judges and the legal community has also increased. The focus of our activities and projects are shaped, in part, by the recommendations of the Supreme Court of Virginia Historical Advisory Committee, chaired by Justice Donald W. Lemons.

Along the way, we’ve learned tidbits and fun facts about the Supreme Court of Virginia, best practices for exhibits and oral history interviews, the serendipity of locating pictures and artifacts on the Internet (including eBay!) and how to cut foam core board in a straight line. It’s been challenging and rewarding. What sort of projects have we undertaken? Here are some highlights from the past year illustrating the new projects our library has completed: 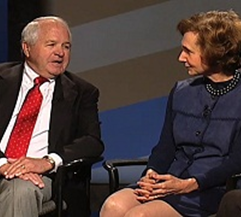 Hon. Sam W. Coleman, III, and Hon. Barbara M.Keenan, at WCVE Studios in Richmond in March 2013.
Preservation Activities
We arranged for professional conservation of one of the oldest and most unique items in the SCV Archives, the List of Attorneys Qualifying to Practice Law in the Supreme Court of Virginia. This volume, begun in 1869, contains signatures of many individuals who were significant in the history of the Virginia State Bar, including the first African Americans and women who qualified to practice in the Supreme Court of Virginia (William C. Roane, circa 1878; and Mildred R. Callahan, in 1923—see her below signature).

﻿
We continue to acquire records of the Supreme Court of Virginia, including photographs, digital images, and ephemera from court ceremonies.  Recent acquisitions include a collection of 22 black-and-white photographs of the justices (1984-2001) and one photograph of a fox hunt, transferred in the spring from Justice Carrico’s chambers at the direction of his widow.  The Department of Judicial Information Technology transferred a laptop issued in 1985 to then Court of Appeals Judge Norman K. Moon (the first laptop issued to judges!).  The Clerk’s Office provided the archives two black-and-white photographs and a pencil drawing of the court building that burned in 1865:

A collection of audio and video and video recordings of court ceremonies, 1969-2011, was migrated from a variety of formats, including reel-to-reel tapes, audio cassette recordings, and VHS tapes, to a digital format. In the near future, we plan to add some of these digital files to our collection in the Legal Information Archive at: http://cdm16064.contentdm.oclc.org/cdm/

We presented a program at the Judicial Conference of Virginia on May 14, 2013 titled, “Completing the Historical Record: Preserving Your Judicial Papers.” Informational resources for judges considering donation of their papers to an archival repository were provided at a table in the conference exhibit area. Our program was followed by Corinna Lain, Professor of Law at the University of Richmond, who graciously mentioned how much she has depended on judge's papers in her legal history research. Building on this presentation, we have crafted a communication to send to appellate court judges and justices upon their retirement, encouraging them to consider the preservation of their chambers' papers.

This month we installed a new exhibit in the display cases on the third floor of the Supreme Court Building. Our exhibit commemorates the 125th Anniversary of the founding of the Virginia Bar Association and the 75th Anniversary of the organization of the Virginia State Bar. Our summer and fall semester interns from VCU’s History Department assisted with the research and preparation of caption cards for the exhibit. An “online” version of the exhibit is available at the Virginia Judiciary Web Site by clicking on The Bar at Work: http://www.courts.state.va.us/courts/scv/hc/home.html 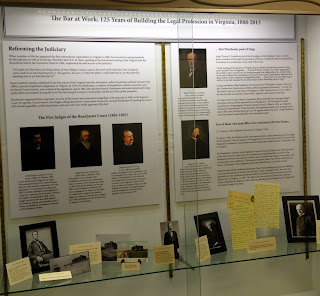