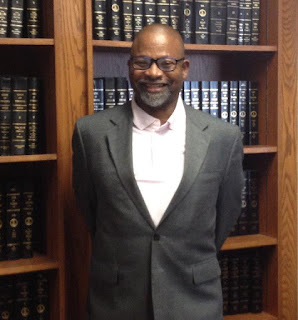 Robert Davis from Prince William County Public Law Library will be retiring at the end of the month after 19 years in public law librarianship.
Robert began his career in the county’s planning and zoning department but was laid off within six months of hire. “Last hired, first fired,” Robert said.
He was fortunate to be hired by the public library system because of his experience in libraries from having worked at Morehouse College’s Trevor Arnette Library during his undergraduate school days.  He was hired on condition that he take reference courses at the Catholic University of America’s School of Library and Information Science.
“I did and I liked it enough to pursue and obtain a Master’s in Library and Information Science,” Robert said. Immediately after that he was hired as the law librarian for the Circuit Court of Prince William County. Robert believes that his law degree from Howard University and his MLIS from the Catholic University of America helped him get the job. “They were getting a two-for-one deal.”
Robert remembers the late Bobbie Denny, law librarian of the Fairfax Public Law Library, encouraging him to join VALL. He served on several committees including the nominating committee and recently, the strategic planning committee.
He was able to attend several VALL meetings but was not as actively involved as he would have liked to have been.  His professional activities were not supported by the powers that be. And Robert also felt he did not have anything to contribute to VALL, but he has since learned otherwise.
“If I have any wisdom to pass on it is in two words:  presence and perseverance!  Make your presence known.  Whether a big or small fish, I learned my training and desire to serve endowed me with skills that are useful each and every day that I am here in the trenches.  I also learned that I must persevere and stand in the power those skills and education equipped me with.  Presence and perseverance enable me to serve to the best of my ability in spite of budget cuts, shrinking civil filing fees, and whatever may come up from time-to-time.  It took me a long time to learn but I now know I am not less than and neither is this position nor this profession, “ Robert said.
He also remembers the people in VALL who inspired him. “I want to thank those folks who unknowingly encouraged and supported me.  Gail Zwirner, Donna Bausch, and the late Bobbie Denny were the ones I looked up to, and tried to follow in serving as a law librarian.  They, I'm sure, did not know that.  But I did,” he said.
“Other stalwarts who always supported and encouraged me were Evelyn Campbell, Frosty Owen, Terry Long, Isabel Paul, Tom Pulver, Patti Petroccione, and Christine Hall.”
Robert is also grateful to the members of VALL. “For whenever the cavalry was needed all of you responded.  I will forever be thankful for having been a member and having served with you.”
VALL wishes Robert well and hopes he enjoys all the activities he is looking forward to doing – lying in a hammock under a gentle breeze,  taking leisurely rides on his bicycle, hiking trails and swimming in cool waters. Good luck, Robert!
Previous Post2015 AALL Award RecipientsNext PostVALL Lunch at AALL
0Shares