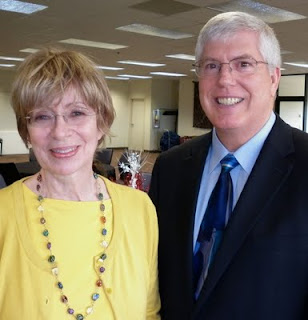 VALL bids a fond farewell to Barbara and wishes her well in her retirement. Barbara has been a longtime friend to VALL ... hosting VALL meetings and participating in VALL programs. She began her academic career at another start-up law school, Regent University, from 1986-1990.

Barbara recalls that that was interesting because the collection was a gift from Oral Roberts University in Tulsa, Oklahoma, and all the books and microforms were shipped on trucks to Virginia. After her stint at Regent, Barbara became a legal indexer, until a former student from Regent and founding dean of Liberty University, Bruce Green, called her back into law librarianship.

"I work with such a wonderful staff and all of us have become quite close over these past seven years. We daily pray for each other and encourage one another. I will miss that time of fellowship and I will miss each and every one of them," Barbara said.

But she has been thinking and planning her retirement for a year and she will retire at the end of this semester. Barbara's plans may take her to a different country.

"I took a tour of Jordan and Israel this past January and absolutely fell in love with Israel. I plan to return to Israel the end of July for an extended stay. I have a few contacts in Israel but at this moment don’t know where I will be staying or what I will be doing. I am praying for God to open the right doors for opportunities there. I am packing up my belongings and putting everything in storage . . . signs of a true vagabond," Barbara said.

In the meantime Barbara will leave Ehrhorn Law Library in the hands of Anthony Ikwueme who will be acting director of the law library.

"It has been a blessing to work under Prof. Barbara Baxter for the past six years. Barb as she is fondly called takes keen interest in everything that concerns her staff. With her never-ceasing smile, she makes us believe that we can accomplish anything we set our minds on. Her leadership style motivates and fosters individual responsibility, accountability, and superior career opportunities. As our founding Director of Law Library, a position she held for seven years, it will be difficult to match her accomplishments. Barb particularly helped the Law School gain full accreditation in record time. The excellent ABA site team reports about the law library vindicate her sterling leadership qualities. We will miss her and we will continue her tradition of excellence," Tony Ikwueme said.

"I'm not sure how many VALL members realize that Barbara Baxter has been instrumental in getting two of Virginia's law schools off the ground. Without Barbara's labors, the countless eighteen wheelers which brought Oral Roberts University's former law library east to form the core of Regent University Law Library's collection would never have left Oklahoma," recalled Donna Bausch. " Without this library, there would not have been a law school in Virginia Beach. Once the trucks arrived, the work had only begun. It was not until Regent's law library program was fully in place that Barbara left Virginia. Many years later, some of Barbara's former colleagues who were helping Liberty plan a new law school realized that no one but Barbara could lead the law library planning effort. Once more into the breach, Barbara's steady hand helped lead another law school from infancy to stability. It is said that good things come in threes, so don't get too comfortable, Barbara, you never know from whence your next call may come. It's been a pleasure to call you a VALL colleague and friend. All the best in your future endeavors."

VALL wishes Barbara all the best in her new adventures wherever they may take her and hopes that she will keep in touch and keep us updated on her travels and work.

Previous PostWelcome to Ben Almoite!Next PostMessage from the President
0Shares