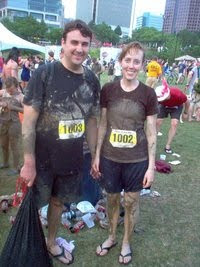 Meredith is the newest reference librarian at McGuireWoods in Richmond. Previously she was with Troutman Sanders in Washington, DC.

She grew up in Chicopee, MA and moved to Maine to attend Colby College. Meredith graduated from Boston College Law School in 2009 and Simmons College Graduate School of Library and Information Science in May 2010.

She met her fiance, Kevin O'Brien, while in law school, and they decided to move back to Richmond which is Kevin's hometown.

Meredith lives in the Museum District with her cat, Mr. Man, and enjoys running marathons in her spare time. "My dad is my marathon running partner so that's fun too," Meredith said. Her most memorable marathon was the Stowe Marathon in picturesque Vermont.

And when she is not running marathoms, she is not above indulging in other types of running ... for instance the "Mud Run" in Richmond in May (see photo of a mud-splattered Meredith with fiance Kevin).