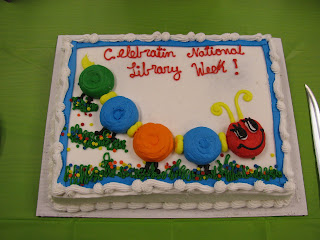 The library added a new event to its list of activities this year -- a Brown Bag Book event which was a community book read that was open to people from the judicial branch. State Law Librarian Gail Warren picked a book that would be fun and appeal to a wide range of employees and be by a Virginia author. She settled on The Many Aspects of Mobile Home Living: A Novel by Martin Clark who also happens to be a Patrick County Circuit Court judge.

Participants brought a brown bag lunch and the library provided dessert. The event proved to be so popular that the library is continuing it as a regular book group with a meeting scheduled for June 9th.

Two of the books were used as prizes in a Virtual Scavenger Hunt which was created by Assistant Law Librarian Dee Dee Dockendorf. 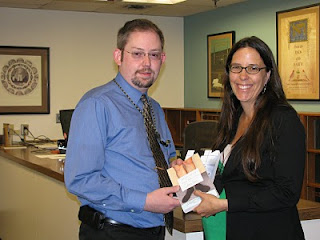 Dee Dee Dockendorf and winner of the Virtual Scavenger Hunt 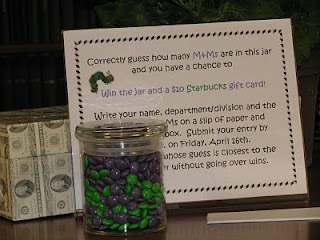 Another activity involved guessing the number of M&Ms in a jar. The person who came close to the number without going over, won the jar of M&Ms and also a $10 Starbucks gift card.

The library also continued its tradition of collecting books for a book drive to benefit a Richmond library. This year the library of the Peter Paul Development Center in Church Hill was the beneficiary of the book drive. The center's website:http://www.peterpauldevcenter.org/ 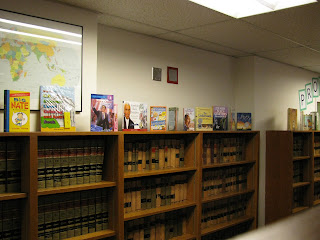