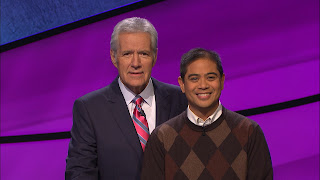 Yes, that's right -- VALL's own Ben Almoite will be a contestant on Jeopardy! this Thursday, January 14, so don't forget to tune in and cheer Ben on!

How does one get to be on Jeopardy!? Other than the obvious ... be really, really good in trivia. Ben took the Jeopardy! Adult Online Test in January, 2014, and had to wait an entire year before he received an email inviting him to an in-person audition in DC in March 2015.

"During that audition, they took my picture and I took another timed 50-question test. Then, on camera I got to play a mock game of the show, and was interviewd," Ben said.

After the interview, he was placed into Jeopardy's contestant pool, which meant that he could get a call to appear on the show within the next 18 months. For Ben that call came eight months later in November, 2015. And in December 2015 Ben flew to Los Angeles to tape the show.

Ben prepared by watching as many Jeopardy! shows as possible. "I played along with the games, practicing ringing in to answer using the Jeopardy! pen I got at the audition," he said.

"I also read several books written by former Jeopardy! champions, including Brainiac by Ken Jennings, and Prisoner of Trebekistan by Bob Harris. Finally, I tried to review a few subjects in which I felt I was not particularly well-versed."

The most nerve wrecking part for Ben was waiting for the show to begin, and the most fun part was, of course, playing the game. Everything is done in real time so the episodes are all really shot in thirty minutes.

"For me, it felt surreal. My whole taping experience was a blur. I remember being on stage and playing the game, having my picture taken with Alex, talking to him briefly during my interview, and then trading handshakes at the end of it all," Ben said.

Being on Jeopardy! was one of the most memorable experiences of Ben's life. Let's tune in on Thursday and cheer Ben on!