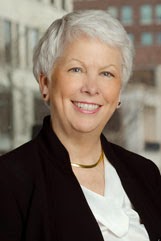 In 1984 Ann Roberts Caudle was the first to wear the VALL president’s hat. The association began as the Richmond Area law Libraries (RALLA) in 1981. As the membership grew beyond the Richmond area, and, so not to be confused with the also newly-emerging Richmond Association of Legal Assistants (RALA), a change was undertaken and by 1986 RALLA became known as VALL.
During her 10-year tenure at the Supreme Court Library and afterwards when she joined McGuire Woods, Ann was often on the phone with colleagues sharing information and ideas.  In the early days she recalls McGuire Woods sponsored an end-of-year luncheon for law librarians.
Ann, who is currently client relations director at Spotts Fain, said VALL allowed her, amongst other things, to develop her public speaking skills, with which “initially I was not comfortable”.  She also said VALL “….was as much a wonderful personal as well as professional affiliation.” She counted among her lifelong friends the late and longtime library manager at Hunton & Williams, Beverly Butler.
Ann said that continuing to educate the legal community, as well as the community at-large of the law librarians’ role is essential to maintaining VALL’s vitality.  She was quick to recognize VALL members’ longstanding contributions to Virginia Lawyer as a key element in addressing that goal.
Ann also said she thinks “lawyers seem possessive of their law librarians, [that they are] valuable people who we know we cannot do without”.  As to VALL’s longevity, she suggested that in part, it may be because “there must have been something good about it to attract so many members”.
If you are reading this, I would like to suggest you agree with Ann’s last statement.  I know I do.
﻿
Previous PostAuthors Guild v. HathiTrustNext PostBeyond Boundaries in San Antonio
0Shares