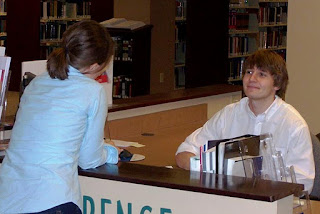 Nicholas Stump is the new reference librarian at the Appalachian School of Law Library.

Nick grew up in Buckhannon, West Virginia. After attending WVU for both his undergraduate and law degrees he moved to Buchanan County, Virginia (pronounced the same!) to work at ASL.

Nick was a student worker at WVU's Law Library during his law school days.

When he's not answering reference questions for students and faculty, he's often found hiking out in the mountains.

VALL welcomes Nick and looks forward to meeting him at future VALL meetings.