Congratulations to VALL's own Sally Wambold! 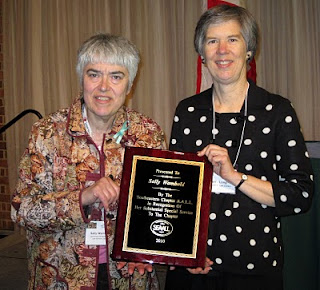 Sally Wambold receiving the Service to SEAALL award from Terry Long
The Service to SEAALL award is given to "a member who has made special, significant and sustained contributions" to the chapter.
"I was privileged to honor Sally this year with the Service to SEAALL award. She is certainly deserving of the award. Sally has served the chapter in many capacities as committee member, chair of the Government Relations Committee, editor of the SEAALL Briefs section of the newsletter and has served as treasurer and as secretary to the chapter. Sally also devised the Preservation Jeopardy game and has coordinated many programs for annual SEAALL meetings," said Terry Long, chair of the Service to SEAALL Committee.
Congratulations once again to Sally Wambold from the University of Richmond Law School Library, it is an award well-deserved!
Previous PostVALL Spring Business Meeting: WilliamsburgNext PostMessage from the President
0Shares